UK hard rock outfit Waking The Angels are set to release new single ‘Stand Back From The Redline’ from their upcoming limited-run EP – The Redline EP – on Friday 21st January 2022. This will be followed by a launch show at Cannock’s Station on Saturday 29th January 2022, and guitarist Greg Dean was on hand to spill the beans on what to expect from the single and the live show.

You’re a new brand-new band. How did you meet?

We’ve been friends in one shape or another for a while. Mike, Paul, and I regularly go away on camping weekends, you know, where you sit in a field, chill, and drink, and unwind. Paul was also Tour Manager for Iconic Eye. Greg ‘Rozzy’ Ison is the drummer for New Device and I used to be their manager up to when Covid kicked in, so we knew each other via that.

What made you say “Yes, I want to be in a band with these guys?”

Well, Mike came round to my house for a meal one evening, socialising and after a few drinks, he started singing. I didn’t know he could! I loved his tone. It turned out that he used to be in a band, many moons ago. I asked if he fancied doing a song and see what happened. I talked about the idea with Paul and he fancied jumping in on bass so that was a done deal, right there and then we needed a drummer. We thought it was really important that we found a drummer that forced the music along and ‘Rozzy’ came to mind. Rozzy has a new drum studio at home and because of Covid conditions at the time that was ideal. He was in! We then recorded a test song, which is actually going to be the lead single from the album when that gets released called ‘Can You See Me Now?’. This track was really the Go/No Go test to see if we were happy that we could produce something we could all stand by. It was a Go! So we went on and recorded a full album, which we are really proud of. 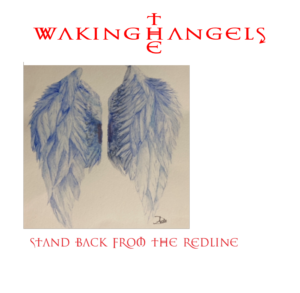 What is your new single ‘Stand Back From The Redline’ about?

It’s about the stress of the situation, when you think you may be at the end of a relationship, but not quite sure, and you also wonder whether the relationship was real at all. So perhaps some self-doubt thrown in there too. Add a bit of burning the candle at both ends and that’s about it.

What can you tell us about the upcoming limited-run EP The Redline?

It’s a 4 track EP, it will contain the new single, ‘Stand Back From The Redline’, the last single, ‘You Know My Name’, and two songs from the forthcoming album, Prisoner and Toxic Lullaby. We are only going to produce 100 copies and the idea is that we wanted to make a physical product available to celebrate our launch at the Station in Cannock. It’ll be available on the night and on pre-sale via https://wta.bigcartel.com/product/the-redline-ep as of now. There’s some other cool merch available on that site too!

How excited are you for the band’s first headline show?

You are in for a treat! We had some amazing feedback at the end of the initial show at ‘Rockers Through The Ages – Xmas party’, and we only did about half the songs, so we really can’t wait to bring the others out, and see what people think of those and also for folk that weren’t at the Xmas Party to see us for the first time. The first time is always magical, right?!

How did you come up with the band name and what is its meaning?

Well, I woke up one morning singing the song ‘Waking The Angels’, wrote the song down, and realised that it would make a great name for the band. Can’t wait for you to hear that song live and, on the album – it’s a banger!

Connect with Waking The Angels, here.

Previous Waking The Angels: New Single ‘Stand Back From The Redline’
Next EPICA: Celebrate 20th anniversary as a band