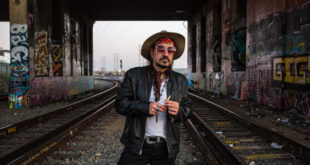 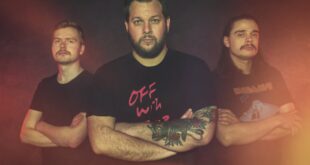 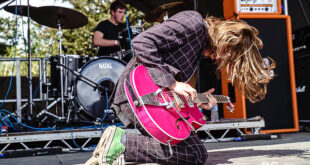 UK-based modern-rock outfit Dead Romantic has been chomping at the bit for the lockdown restrictions on live music to lift and finally, they can make their way to the world-famous Black Heart in London for what sounds sure to be a night to remember. Vocalist Dan Taylor checks-in on the eve of the gig to fill us in on what those in attendance can expect. 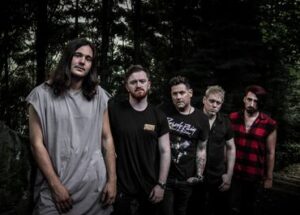 Dead Romantic has just played their second gig of the Covid era, at the Waterloo in Blackpool, that must have been insane?!

Yeah, it was awesome, and the response from the people there was sick. I’ve never played that venue before, and it’s really cool with all the memorabilia and the Lemmy bar. The response to the music was incredible, everyone was buzzing, and jumping up and down, it was a really cool show. And for a second show, you can’t really ask more than that, everyone was really welcoming.

I believe that it was a gig free from restrictions? No one had to sit at tables for instance?

It was fully opened up, people were headbanging on the dance floor, it was a proper gig, going back to the good old days! It does sound weird saying “the good old days” considering it was only a year ago…but you get what I mean! It was quite liberating because everyone was just doing what they liked, and it’s cool to be back to that.

It certainly is, especially since The Black Heart in London, where the band is playing on Wednesday, is posting that gigs are back to full capacity, that’s fantastic to hear…

Yes, it is fantastic to have people out and for them to be able to enjoy the show. When we played earlier in Oldham, that was all tabled, it was still a great gig, but there is an extra buzz when everyone is there and focussed on the music as well as being allowed to jump around. I’m a sucker for moshpits so none of that could happen if everyone was sitting down! We are essentially a lockdown band and we haven’t really had crowds up until now, so to see it from the stage is unreal. 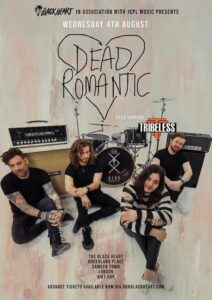 If I remember correctly, both The Waterloo and The Black Heart were threatened with closure due to the lockdown, so it must be special playing a part in keeping music alive at venues such as these?

Definitely, it’s important now more than ever that people support live music and venues like these because if venues such as The Waterloo, and The Black Heart shut down, then where will up-and-coming bands play? Without these venues, it would just be bands playing festivals and nothing else. The bands who you might call “small bands” are the Metallica’s of the future, so if you don’t support small bands, and local venues, then who is going to breakthrough in the future?

One of the most frustrating aspects of the lockdown was the lack of support and investment that the entertainment industry got, venues and bands have been forced to give up over these last twelve months or so because they had no help whatsoever. And then you have people in other situations that have maybe been getting too much…that has been frustrating, but hopefully we are on the way back… venues are open again, shows are back on.

It’s Tribeless that are supporting at The Black Heart, yes? Great band!

Yeah, Tribeless is playing with us at The Black Heart, like you said, great band, and it should be a great show. We’ve been working on our show for the last few months now, and I feel like we have it pretty set now. It’s an exciting show, we all thrive on being onstage and there’s a lot of energy, and it should be pretty sick…I think!

What can those lucky enough to be at The Black Heart expect on Wednesday? A full-on in-your-face rock show?

Oh yes, we aim to put that on every time, I mean, we’ve got a lot of noise! [Laughs] We are going to project a lot of noise from whatever stage we are on, and the more that people throw themself around, then the harder we will perform. We’ve been preparing for it for a long time now, we are so meticulous in rehearsal and we record everything that we do….

So you playback the rehearsal and strip it down to see what works and what maybe doesn’t?

Yes, we record every rehearsal that we do, record every show that we do, and sit and listen back together and say things like…well that wasn’t quite on-point there, or maybe this order of songs didn’t work so let’s maybe switch things around...we’ll break everything apart just so that we can make everything as good as it can be for the next show.

Of the songs that you have rehearsed and performed live, what is the most difficult for you personally to perform?

Straight-up honesty? The first single ‘Yesterday’. That’s the most difficult for me to perform live. Because it was the first single and it got such a great reception we’ve stuck it right at the end of the set, but, there’s not much space in that song for breathing. There’s a lot of singing, and not much room for breathing, so I have to be really meticulous with how I breathe and the techniques that I use when I am performing that song. So I would have to say for me personally, that is the most difficult one. 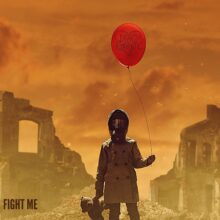 The new single ‘Fight Me’ is a bit of a banger isn’t it! The line…” I will paint the walls with what is left of you” is so powerful! Hard to imagine anyone not identifying with that one…

[Laughs] Yeah, so when we are writing in the studio there is a kind of a long-running joke that I have this kind of darkness inside me! I am a happy-go-lucky guy, but then as soon as it gets into the songwriting process then all these dark, horrible images start coming out!

Yeah, I’ve always liked emotive lyrics, even depressing songs, I guess that they speak to me on a deeper level maybe? Anything angry, or depressing, has a bit of extra weight to it. The song is about those kinds of moments where something or someone has kept pushing and pushing up to the point where you just break and you are like…I am done with this, I am going to start flipping tables…[laughs].

We can all identify with that feeling!

Yes, for sure! But although we write the songs, it’s not really our place to tell people how they should take them. If it speaks to someone in a certain way then that’s what it’s about to them. It could be a person or a thing, but ‘Fight Me’ is about when you got to that point where you say…right, I can not take this anymore, let’s throw down…I have my meaning to the songs that I write, but if someone else listens to the lyrics and gets a different meaning, then brilliant because that is what music is all about. It’s open to individual interpretation. 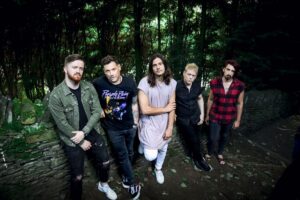 What are you like when it’s approaching midnight on the day of release and new music is out there for all to pick over? Are you nervous? Excited? Both?!

A bit of both, I suppose. It’s exciting because obviously, we trust the songs, we like the songs and that’s why we are releasing them, and we feel that people will also like them. But then, at the same time, that’s when the nerves come in because if we feel that people should like them, and they don’t, then it’s like…oh, shit! So it is a mixture, but we are excited for everyone to hear what we have done, I’m so excited for the album to come out and I can’t wait to find out what people think of it as a collection of songs, as a whole finished product.

So far, the songs released seem to have struck a chord, some of the figures are amazing with each video racking up 1.5+ million views on YouTube, that’s amazing…

It’s fantastic, to look at it and see how many people are watching and listening is amazing. We keep on hitting milestones, on Spotify also, and it’s overwhelming to see the reactions. When the first one hit one million views it was absolutely mental, and then the second one did it and we were like…oh, okay!…‘Fight Me’ has just come out so hopefully, that can do the same. We are just really thankful that people are taking the time to listen to what we are doing and watch the videos because the videos don’t come without effort on different levels. It’s not just us, there are filmmakers, and people who have helped us out, so to have the videos watched and appreciated is really rewarding.

You must be desperate for people to hear the album?

When we look at the analytics on Spotify and YouTube, there are people listening in from the US, South America, Asia, and Europe…all over the world really. So we are really excited to get the album out for these people to listen to it. We just want to get out on the road and play it for people. The plan is to get out there and start touring, whether it’s a support slot that we can get, or a headline tour, we just want to get out there and show people what we can do. The London show, I’ve heard that there might be a few industry people coming down, so maybe that will lead to something? But either way, we will be out there soon, playing for as many people as we can, playing as many places as we can get to. We’ve been pushing ourselves to make the shows as good as we can, so if you have watched the videos and enjoyed them, come down and catch the show as it’s even better.