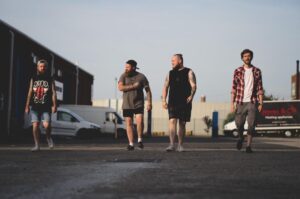 Drawing heavily on old school classic rock and modern alt-rock, the band take their influences from Irish greats such as Thin Lizzy & The Cranberries alongside the likes of My Chemical Romance, Deaf Havana, and Architects.

In 2020 the band released their debut single ‘For What It’s Worth’ which was followed up in 2021 with the release of both ‘Lost Hope & Mixed Blessings’ and ‘Just A Memory’. All 3 tracks would lay the foundation of what was to be their debut EP ‘Youthful Souls’ which is released on 28th January. The title track of the EP will be also released simultaneously for airplay!

“This EP has been a decade in the making. To finally be able to put it out and share it with the world is something we’re incredibly excited about, these songs mean a lot to us and we can’t wait for people to hear them!”
– Harley & The Wolf

Track 1: JUST A MEMORY
“The struggle of mental health in trying to form relationships when substance and alcohol abuse seems to be the only way to deal with problems”

Track 2: LOST HOPE & MIXED BLESSINGS
“A fight against the routine of the daily grind and no matter what life throws at you, you can always face it head on and fight for your dreams”

Track 3: YOUTHFUL SOULS (BUILD A BRIDGE)
“A nostalgic tale of youth but as life progresses and friends drift apart and forget each other, moving on is the only choice”

Track 4: FOR WHAT IT’S WORTH
“A one-sided relationship that has ran it’s course and the realization that it has to come to it’s conclusion”

FOR FANS OF: LOWER THAN ATLANTIS / DEAF HAVANA / PARAMORE https://linktr.ee/harleyandthewolf

HARLEY’S SPOTIFY MIXTAPEA collection of songs that inspired the members of Harley & the Wolf as musicians as well as providing inspiration throughout their writing processhttps://open.spotify.com/playlist/2GGhii01mIgKa5nES2hvtr?si=32d245daf11148c4&nd=1