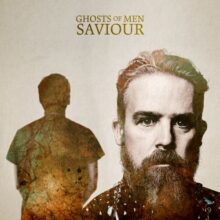 Heavy, alternative two-piece rockers Ghosts Of Men announce the release of their debut album ‘Exhale’ on January 2021. The album will be preceded by a new single ‘Saviour’ on 11 September 2020.

New music is perhaps just what we need to cheer us up at this point in time. ‘Exhale’ was slated to follow a busy Summer of gigs and festival slots but, like all of us, Ghosts Of Men have had to bunker down and play the waiting game; the band have slots at Bloodstock and HRH 14 on the cards. Previously, the band have toured extensively in Europe and played great Festivals; particular highlights being RosRock with Skindred in the NL, and Bearded Theory and Beautiful Days. The band are a potent live force, being described as, “Like a two piece Queens of the Stone Age, if Queens of the Stone Age were entirely composed of Morecambe and Wise” by BBC Radio. However, make no mistake, this band are deadly serious when it comes to the music and to playing live – having already performed over 150 festival dates.

‘Saviour’ is the latest in the band’s series of killer tracks, and follows their well-received singles ‘Trouble’, ‘Crooked Back’, ‘Hang Fire’ and ‘I See You’. Constantly building their fanbase, Adam and Clegg set out to tear into every show they play, and take their beloved audience with them. They might only use drums and guitar but the sound that Ghosts Of Men can create is unbelievable.

Clegg [Guitars/Vox] said, “Most of songs feature some kind of a struggle between the dark and light sides of our natures and that is especially true of ‘Saviour’. This track came from a culmination of our shared experiences during poor mental health, past drug addiction and past relationships. It explores the phenomena of being placed on a pedestal, when really you can do nothing more than just keep your head above the water on a daily basis. I recently experienced this when taking disadvantaged kids to India as part of my work. The more uplifting lyrics were inspired by these experiences in a magical place”.

Royal Blood, White Stripes, Suicide, Black Keys, The Kills, Carter USM, the world of rock has seen a few two-piece bands that can overcome the perceived limitations of the a limited line-up, strip back to essentials and really bring the noise. In fact, Les Carter from Carter USM said, “Ghosts Of Men are amazing. People always said that my old band made a big noise for two people, we cheated though, we had backing tapes. Clegg and Adam take it to a whole new level. Awesomeness drips from every note.”

‘Exhale’ is the sound of two remarkable musicians. Fuelled, often, by the darker side of life but always struggling towards the light, this is a band full of fight and fever. Don’t give in, breathe out…

Connect with Ghosts Of Men; here.