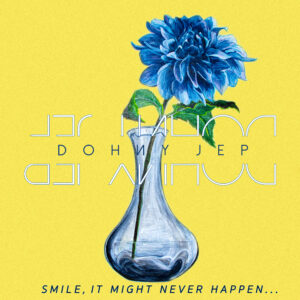 Kent-based alternative-rock four-piece Dohny Jep began as a duo in early 2019, with Stuart and Pete deciding to create something unlike anything either of them had done before in previous bands and projects. With their unique video concepts and mesh of pop-synth melodies and rock guitars, they did just that. Fast forward one year and with an additional two members in tow, the group self-released their much celebrated debut album L.U.S.T in July 2020.

Since the release the band have amassed over 50,000 streams on Spotify, received regular airplay from Hard Rock Hell Radio and BBC Introducing as well as glowing reviews from the likes of Dead Press and Distorted Sound.

After playing just one show together as a band, they had tours planned throughout 2020 to coincide with the release of their debut album, but as the Coronavirus put a halt to any plans of playing their new material live, they headed back to the studio to record more new music. A product of this recording session is their fantastic upcoming EP ‘Smile, It Might Never Happen’, due for release February 26th 2021 via Favour The Brave Records.

Recorded at their recently-built home studio and produced, mixed and mastered by Rhys May, assistant producer to Dan Lancaster (Bring Me The Horizon, Don Broco, While She Sleeps) the EP explores the subjects of mental health, friendship, and letting go of the negatives in your life & living in the moment.

Prior to the release comes the EP’s leading single ‘Looking In’. Commenting on the track the band state: “Looking in is about feeling left out and neglected, wanting to be included but also struggling to make these feelings known, causing you to never really get anywhere”.

Smile, It Might Never Happen is due for release February 26th 2021 via Favour the Brave Records and will be available on all major platforms.

Leading single Looking In is due for release January 29th 2021 via Favour The Brave Records and will be available on all major platforms.

This could be your new favourite band, possibly the best band name in Kent.” – Abbie McCarthy, BBC Introducing in Kent

“With songs any big artist would be proud of writing, this British band will be showing the world how it’s done very soon.” – Dead Press

“Dohny Jep clearly know what their sound is and they have a clear vision of where they want to go next.” – Distorted Sound