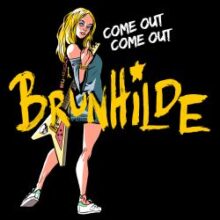 The new and exciting album To Cut A Long Story Short has just been released, and BRUNHILDE are already following up with their seventh single. At least every eight weeks, you can expect a new single by this up-and-coming band. At least every two months, like clockwork, BRUNHILDE make you want more!

Their latest hit is called Come Out Come Out. In the accompanying video, Bloodhound Gang bass man Evil Jared once again has a very special guest appearance alongside BRUNHILDE, while singer Caro and her guitarist Kurt Bauereiß put the pedal to the metal like there’s no tomorrow.

Speaking of “no tomorrow”… “Come Out Come Out” is not a “zombie” song. “Initially, our producer Charlie Bauerfeind thought of the undead crawling out of the ground when he wrote the lyrics,” Caro explains with a laugh, “but in fact, the lyrics completely refer to reality and they are totally positive.” “The drug of life is a sound of a guitar” – that’s what the chorus says. And Caro goes a little deeper: “With the single Come Out Come Out we want to encourage our listeners to live their own lives. Don’t follow a system, believe in yourselves and in your dreams. Stick to your guns, even if there might be some setbacks.”

The 21st of March is, as we all know, the beginning of spring. A couple of days later, BRUNHILDE now celebrate life: “Come Out Come Out, wherever you are!”

BRUNHILDE – a name that sounds like a thunderstorm. Mystical and legendary and very close and alive. Their name taken from the ancient German Nibelungen Saga, BRUNHILDE are rising stars with their intriguing Punk & Metal sound made in Germany. Right in the centre of the storm, there is the spectacular front woman and lead singer Caro – blond, wild and belligerent – a real Valkyrie come to life, taking the audience by storm. Accompanied by her “partner in crime”, axeman and song writer Kurt Bauereiß, this beauty sets every stage on fire like a beast and knocks her fans off their feet with her style, her energy and her voice. There’s no doubt about it: BRUNHILDE emanates a magical mix of hard guitar riffs and blond poison. The enigmatic duo is about to conquer the world (of music) – with their unpretentious and straightforward Rock & Punk songs, mixed by none other than master-producer Charlie Bauerfeind (Blind Guardian, Helloween, etc.), who instantly saw the extraordinary potential of this band. All the songs were recorded in the band-owned Streetlife-Studio in Fürth, Germany. The duo was joined by bass player Oliver Holzwarth (ex-session musician for Blind Guardian) and drummer Bastian Emig (Van Canto). BRUNHILDE embark on the latest chapter of an amazing saga in spring 2020, when releasing their first single and their following EP. And those are just harbingers of their forthcoming thunderous LP. Stay tuned!