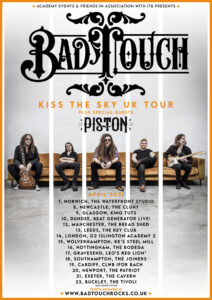 Norfolk groove merchants Bad Touch return with album number four, ‘Kiss The Sky’. Although it will surely be a case of ‘Kiss The Ground’ when (fingers crossed) Bad Touch pull up outside The Waterfront Studio in Norwich on April 7th next year, for the opening night of a tour which has been rescheduled not once, but twice. Third time lucky? One can only hope so, as Bad Touch are proverbial “road warriors”; a band made for traversing the motorway networks of this sceptred isle, and doing what they do best: plugging in and rocking out.

Expertly produced by Nick Brine and recorded at the world famous Rockfield Studios in Wales, ‘Kiss The Sky’ has Bad Touch in inspired form. This is the album they have been threatening to make for the last few years. Each previous album seemed to be building towards something special, and ‘Kiss The Sky’ is that “something special”.

Fine-tuning the songs in their own rehearsal studio before heading to Wales meant that by the time the “record” button was pressed the band was fired up; something that instantly shows on the riff-laden album opener ‘Come A Little Closer’. It’s an instant shot of bluesy, guitar driven rock’n’roll that is instantly recognisable as Bad Touch.
This continues with ‘I Get High’; again, within a few bars, the listener knows that it is Norfolk’s finest playing.

One rather lovely extra string to the Bad Touch bow is the use of backing vocals that elevate the songs to a different level. If you have seen Bad Touch live then you will be aware that drummer George Drewry has a strong voice which complements lead vocalist Stevie Westwood really well. ‘Kiss The Sky’ plays on this strength, and ramps it up even further by adding another layer of atmospheric backing vocals courtesy of Katy Dann, which especially stand out on the likes of the sublime ‘Let Go’, and the raucous, good-time cover of Kiki Dee’s ‘I’ve Got The Music In Me’.

Another honorary Bad Touch member, Bob Fridzema, puts his magic fingers to good use from behind his keyboards; how good would it be if Fridzema joined the band on tour next year?

One of the most pleasing aspects regarding ‘Kiss The Sky’, is that when Bad Touch takes the foot off the gas, or mixes it up by getting a little funky, the heart and soul doesn’t dissipate. ‘Can You Save Me’ (featuring killer backing vocals from Drewry), is a real slow-burning track that will sound massive in a live setting. ‘Before I Die’ funks it up big time thanks to the fat bass lines from Michael Bailey and a sizzling guitar solo.

Then there is the towering ‘See You Again’. Four poignant minutes dealing with the heartbreak of losing a parent, ballad-esque to an extent, but without the schmaltz that is usually associated with a ballad. A fantastic example of the growth within the band in the songwriting department, as is the closing track on the album ‘Something About Your Kiss’. The band spoke about the latter as being a step out of the comfort zone; on the strength of this beauty they need to step out more often.

Ultimately, ‘Kiss The Sky’ is a guitar album, and lead guitarist Rob Glendinning is quietly going about the business of melting faces in his own non-fussy way.
If further proof was needed that lead guitarists don’t need to be flash bastards, then Glendinning is the man to provide it. With Daniel Seekings alongside him, the pair produce a gorgeous sound, with nods to the likes of The Allman Brothers on gems such as ‘Read All About It’ and ‘Too Much Of A Good Thing’, as well as heaps of slide guitar peppered throughout the album.

Now more than ever, bands like Bad Touch need supporting. By all means stream ‘Kiss The Sky’, but then go buy the album, and a t-shirt, and a patch…