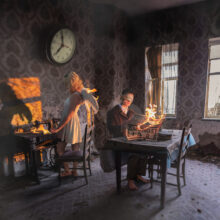 The most recent entry into a run of well received singles that dropped throughout 2020, A-side ‘Black Days’ launches a full-frontal assault on the last 10 years of Tory rule, calling out austerity measures, questionable decision making, incompetence, lies and self-serving political bias.

“We developed B-side ‘Oceans Apart’ from an acoustic track into a full band one, as felt that it would work well with Black Days. And also, we wanted to be a bit old school with offering up an A/B side release, to make things a bit different”, the band say.

Amongst Liars was formed in early 2020 and their other singles – Over and Over, Wolf Machine, Burn the Vision and Mind have seen 145k Spotify streams collectively, as well as strong video views across all platforms.

They finished recording their debut album in November 2020 with producer David Radahd-Jones (Heaven’s Basement, The Fallen State, The Cruel Knives, Death Blooms), with a view to releasing it in late 2021.

“We have spent the last year really working on our sound and writing loads of songs. Since starting up, we have now recorded 18 songs, yet only played one gig!”, says Leo 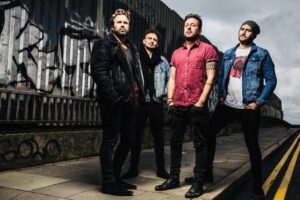 “Feeling both classic and contemporary, there’s enough going on to please even the most veteran of rock fans, while providing the opportunity of blowing the ears of a younger generation wide open – exciting stuff”
Louder Than War

“For a group that’s been together for less than one year, Amongst Liars sound as musically accomplished as bands that have been playing together for years”
V13 Magazine

“A huge slab of rock that deserves some stadium attention!” / “huge walls of guitars and choruses to fill the Mariana trench”
BBC Introducing In The South

Previous Review: Mason Hill – ‘Against The Wall’
Next Evanescence Release New Single “Better Without You”